Isaiah 49:22
This is what the Sovereign Lord says: “See, I will beckon to the nations, I will lift up my banner to the peoples; they will bring your sons in their arms and carry your daughters on their hips.


Banners are a signal!

A Banner is a powerful sign, a signal from an authority, which symbolically announce the power and the authority of the people subordinated that Banner. The people under the Banner are identified with what the Banner represents. Being under a Banner is honorable, and something highly regarded. It gives rise to pride and identity. However, standing under a Banner even entails an obligation.

The Banners of the Lord proclaims that Jesus won victory on the cross. Banners signalize God’s salvation and victory over sin, death and devil. The bronze serpent, which Moses raised as a Banner, is prophesying about the crucified Jesus Christ (Num 21:8; Jn 3:14). The colors and symbols on the Banners symbolize different aspects of the death and resurrection of Jesus.

The people of ancient times used army-banners as they went to battle. Since his time as prince in Egypt, Moses was familiar with Banners. When the Israelites were first attacked by the Amalek (a desert people) and won, he raised the altar which he called “The Lord is my Banner” (Ex 17:15). The word “Nēs” (Hebrew) in verse 15 means Banner, flag, signal. The root of the word “Nēs” is : to show. This word occurs 19 times in the Old Testament.
Otherwise, the Hebrew word “dagal” is used 14 times. The word has its root from: to be seen, observed. The word means standard, Banner. 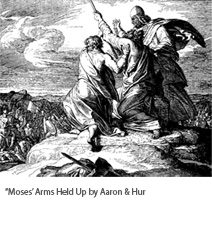 Moses was the one who introducing Banners to the Israelites, God’s own people right from the start of their wandering in the wilderness. The people as a whole was provided with Banners and each family had their specific Banner. God commanded them both to encamp and to set out under their Banners (Num 2:2; 2:34). The Banners of Israel signalized as to whom there were subordinated, who their God was (Ex 17:15). Banners marked that God was with them. Where the people set out, God arouse (Num 10:35). How many different types of Banners the people of Israel had, is not known. From old Israeli tradition we hear about four main-banners: The Lion (Judah), The Man-head (Reuben), The Ox (Ephraim) and The Eagle (Dan). See Gen 49:9; Ezek 1:5-10; Rev 4:7; 5:5. To David and the Old Testament prophets, Banners were well known (Ps 60:4; Isa 5:26; Jer 4:6).

In old Israeli tradition, the main Banner was The Lion of Judah. The descendants of Judah used this Banner in the wilderness (Gen 49:8f; Rev 4:7; 5:4). During the wandering in the wilderness the tribe of Judah (largest tribe in Israel), went first with the “Lion-banner”, counting 74.600 men with their families (Num 1:27). When Isaiah and Jeremiah describe how God at the end of time raises up and intervenes, Banner is a central word (Isa 18:3; 62:10; Jer 50:2). 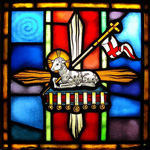 The early Christians obviously inherited the banner tradition from Jews. In the New Testament the following passages, when they talk about magnifying and exalting, have the underlying significance of  raising a Banner: 1 Lk 1:46; Acts 10:46; Phil 1:20. From the Qumran-findings from the times of Jesus we hear about the Banner “Joy in the Lord” (1 Qm 4:14). The first known Christian Banner is the victorious Lamb of God, Agnus Dei, inspired from Rev 17:14. It shows a lamb, carrying a Banner, a sign for the Christians and their victory, even amidst persecutions and death.
Banners mark God’s spiritual presence, His hand stretched out over us.  Banners help God’s people in adoration, magnifying and worship, and in serving Him joyfully and without fear
(Ps 20:5; Isa 62:10).

“But thanks be to God, who gives us victory through our Lord Jesus Christ” (1 Cor 15:57)
“We will rejoice in our salvation and in the name of our God we will set up our Banners” (Ps 20:5)